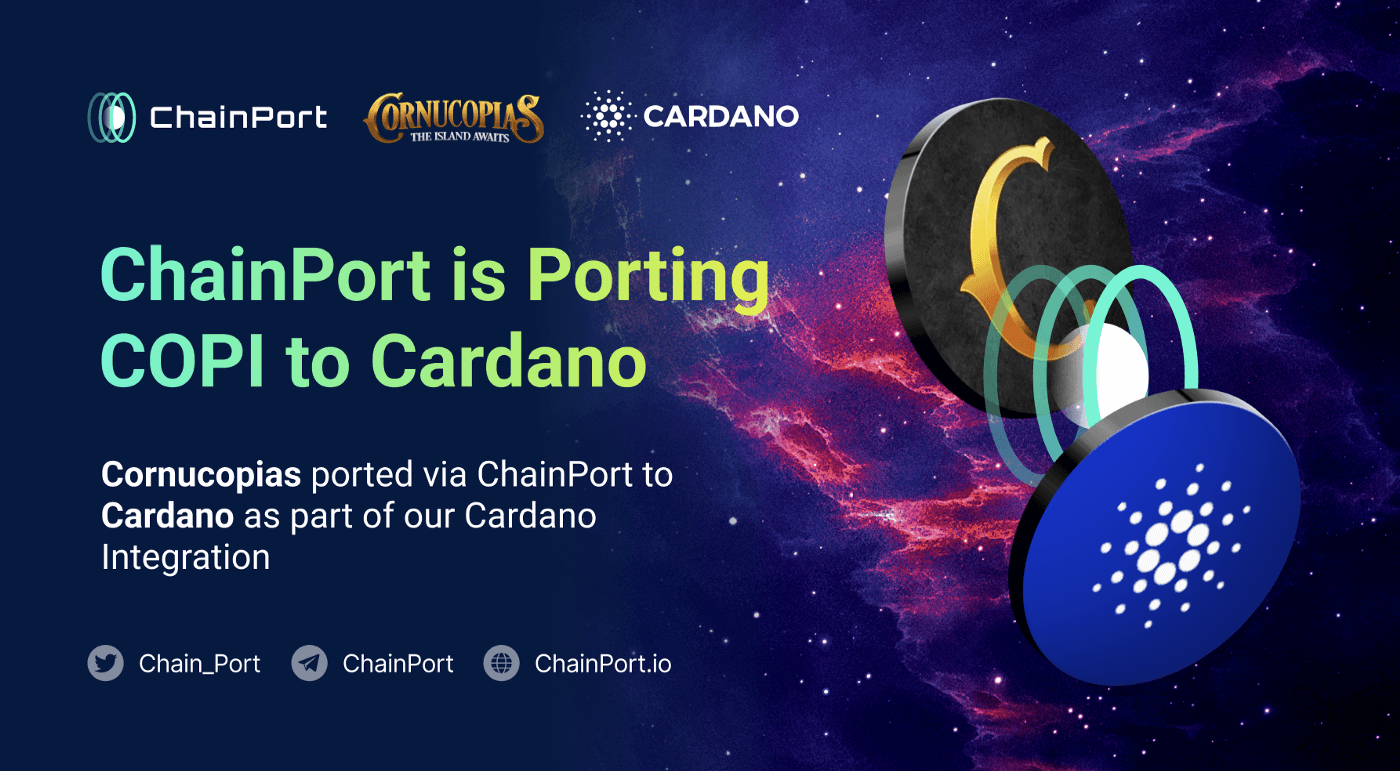 We’re excited to announce that Cornucopias is the first project that ChainPort bridged from Ethereum and BNB Chain to Cardano as part of our Cardano integration to the bridge.

Cardano integration is an important milestone that the ChainPort Team has been working on for the last month with the Cornucopias team.

Cardano was part of the Q2 Roadmap for ChainPort, but now we might see it live for all projects very soon. In addition, ChainPort is offering our private bridging service for selected projects who want to explore other non-EVM chains like Cornucopias did with Cardano.

From now on, Cornucopias has a fully tradable token on Minswap COPI/ADA

In the following weeks, we will introduce full support for Cardano on ChainPort. However, for now, projects can only port to Cardano via our private bridge by contacting our team.

Cornucopias is one of our best partners, and we value them, so we knew they wanted to be on Cardano before our Q2 roadmap integration. So we helped them achieve this.

Cornucopias’ “The Island” is a massive Play-to-Earn, Build-to-Earn, and Learn-to-Earn blockchain-based game in which players can be rewarded with and/or own land, properties, and other NFT-based assets with real-world value, all by playing games in a fun and safe metaverse.

“The Island” combines gaming with real-world commerce and gives opportunities for traditional and e-commerce companies to sell and promote their real-world brands, goods, and services to a hard-to-reach audience they have potentially never had access to before.

“The Island” is built on the Unreal 5 games engine, which is compatible with the PC, mobile phone, gaming consoles, and smart TVs, and will be powered, governed, and forever evolving thanks to a growing number of communities including blockchain, Unreal Game Developers, 3D artists and modelers, and general game enthusiasts.

ChainPort is a next-gen blockchain bridge that provides custodian-level security with real interoperability, allowing instant hops across chains at a click.

ChainPort has been live since July and has already grown to port more than 110 tokens with $300M TVL and an average daily volume of $5M, with a current 30% monthly growth. Position itself as one of the top 5 biggest bridges in the space, and #84 by TVL between all dapps and DeFi’s in the world.

ChainPort offers permissionless ports between chains with a simple UI and supports seven wallets. In addition, ChainPort is a high-speed bridge -12 confirmation on Ethereum, only 2.5 minutes on average!